On view at the Jones Center on Congress Avenue.

Torbjørn Rødland (born 1970 in Stavanger, Norway) works with analog technology and readymade spaces to create photographs that render the everyday uncanny. His images blend the cool, seductive aestheticism of commercial and fashion photography with the layered complexity of a conceptual practice, resulting in ambivalent perspectives that both attract and repulse. This contradictory stance is intentional, the artist’s careful positioning of his work within a fugitive field. From the media-savvy reality critique of 1980s Pictures Generation–era artists, à la Cindy Sherman and Richard Prince, to the seemingly captured moments of Nan Goldin and Larry Clark or the rigorous conceptualism of Christopher Williams and John Baldessari, practitioners working in photography in recent decades have sought to upend notions of authorship and originality in representational imagery while grappling with the concerns of conceptualism within a medium that is inherently grounded in reality. Concurrently, the advent of digital photography has both expedited and removed uncertainty from the process, rendering the analog formats Rødland uses a specialization.

Combining elements from both fleeting and constructed space to summon “a more layered move into the erotic, the psychological, [and] the spiritual,” Rødland strives for a new, hybrid, and unfamiliar (analog) art form, which he calls “transpluralistic photography.”1 His images channel the mythmaking quality of both contemporary media and art historical paintings, inspired by the ways in which pictures can evoke multiple meanings and complex if ambiguous narratives. Images like Baby, 2007, a portrait of a nude baby sitting upright with one arm positioned across the chest, looking intently into the camera, or Five Tears, 2014, a black-and-white image showing the downturned face of a woman with a stylized blond bowl haircut and viscous tears suspended on her cheeks, could seem to deconstruct religious iconography as much as the often objectifying gaze of commercial photography. For his presentation at The Contemporary Austin, the artist’s first solo exhibition in Texas, Rødland will display a selection of recent and older photographs alongside new photographs created in Austin.

Rødland’s compositions feature “close-up” subjects within theatrical, highly orchestrated environments. His earliest works from the 1990s captured Norwegian landscapes, through vistas appearing increasingly bizarre over time, followed by contrived, yet disarmingly ordinary, still lifes and portraits. More recent subject matter unsettles the fleshly and banal. These include details of body parts, such as faces, hands, knees, and stockinged feet, caught in improbable, suspended actions: an octopus tentacle protruding from a sleeve around a woman’s hand; a shirtless young man staring into the camera while grasping the collar of his elderly cohort; a female torso wrapped in sausages. Other works depict incongruous-seeming objects, fruits, or accessories: a cut orange with hair wisps; a sweater on a street post; a woman’s foot covered in goo; a shattered piggybank; crumpled silverware. Rødland’s intonation in his manifesto “Sentences on Photography” offers insight: “A photograph that refuses to market anything but its own complexities is perverse. Perversion is bliss.”2

Speaking to the complexities of his work, the artist’s decision to use the slow format of analog film and darkroom processes (instead of digital) suggests his attention to durational time and tactile material. Like a film director, Rødland frequently works on theatrical sets with models and actors who collaborate with the artist to shape the final images. (Rødland has more recently begun working in film and video, in addition to photography, a practice that he indicates evolved from his early landscape photography and an impulse to render “new life” into these still forms.3) The artist’s painstaking attention to elements such as set construction, object placement, decor, and lighting manifests in striking compositions: the backlit subject, the just-so placement of objects and appendages, or forms and colors that double or reference one another across disparate images. Other photographers have carved out related territory, such as the paper-constructed environments of Thomas Demand’s photographs or the spooky, cinematic mise-en-scènes of Gregory Crewdson, but Rødland’s images lead with enigmatic eroticism and mind-bending scenarios that confront viewers head-on with equal parts intimacy and discomfort.

Rødland’s attention to composition further extends to his treatment of photographs as objects in space: often, he will hang framed images low to the ground, uneven distances apart, or close to the ceiling, creating displays that both intrigue and confound, like cut-up imagistic poems on the wall. Concurrent with his use of analog media, but not incompatibly for Rødland, his work equally engages the rapid temporality and virtual/digital nature of Internet “meme” culture (and its evolution into today’s Instagram)—information borrowed, imitated, and recontextualized with humor and passed along to others—which the artist has said functions like “poetry for the post-poetic mind.”4 Memes are identifiable, relatable, scripted, and absurd. As the artist further noted: “I relate to the sensibilities of Instagram culture. Sometimes I feel that it validates my artistic output.”5

One viral meme making the rounds as of this writing captures the 2019 Emmy Awards presentation by reality star siblings Kim Kardashian and Kendall Jenner—representing perhaps the most blatantly media-contrived family of the twenty-first century—reading sincerely from a prompted script to the tune of “being themselves” and “telling their stories unfiltered and unscripted,” as the audience bursts into laughter evidently at and not with them.6 While irony is not necessarily the artist’s intent, returning to the concept of perversity as bliss, a contradictory humor often suffuses Rødland’s images—a black banana protruding out of its peel, a vacuum cleaner sucking up the end of a woman’s skirt—where deadpan comedy meets seriousness that prompts (cue script) one to ask who is laughing at whom, and whether one should be laughing at all. Alienation, loneliness, solitude, privilege, eroticism, and humor permeate his photographs in images both startlingly identifiable and inescapably surreal.

1 Artist in email correspondence with author, July 16, 2019.
2 The title “Sentences on Photography” nods to Conceptualist Sol LeWitt’s “Paragraphs on Conceptual Art,” 1967, and “Sentences on Conceptual Art,” 1969. Rødland’s full manifesto can be found here: https://www.canopycanopycanopy.com/contents/sentences_on_photography.
3 Artist in email correspondence with author, October 9, 2019.
4 Torbjørn Rødland, “Torbjørn Rødland Turns the Inside Out: The Artist on Why the Meme is the New Church,” interview by Robert Grunenberg, SSENSE, https://www.ssense.com/en-us/editorial/culture/torbjorn-rodland-turns-the-inside-out.
5 Ibid.
6 Ron Dicker, “Kim Kardashian And Kendall Jenner Laughed At By Emmy Awards Audience,” HuffPost, September 23, 2019, https://www.huffpost.com/entry/kim-kardashian-kendall-jenner-laughed-at-emmy-awrds_n_5d88957ee4b0957256b9e3e5.

This exhibition is curated by Heather Pesanti, Chief Curator & Director of Curatorial Affairs, The Contemporary Austin, with text also by Pesanti.

Torbjørn Rødland: Bible Eye is funded in part by Jarl and Pamela Mohn. 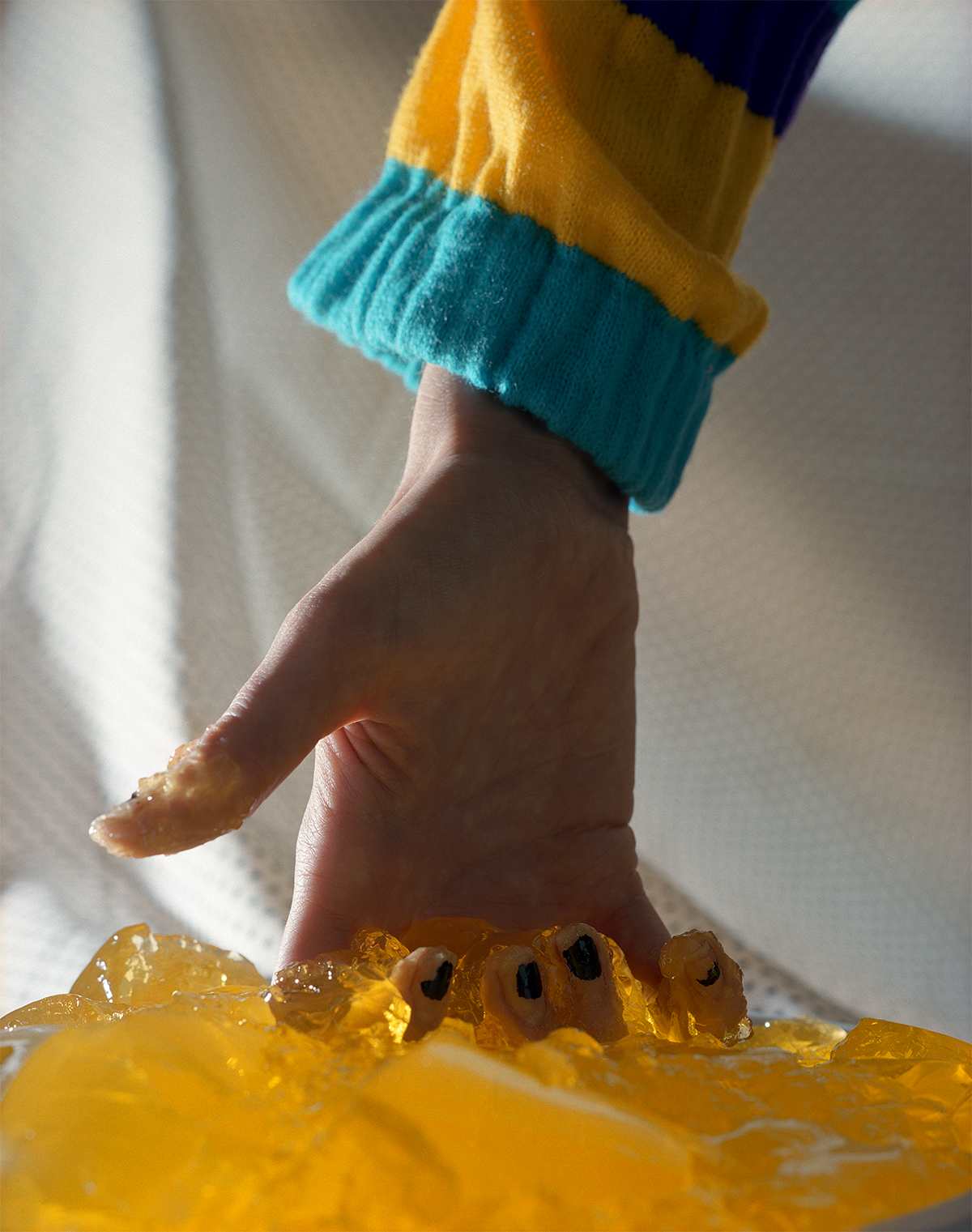