Now open to the public in a limited capacity

The Art School at Laguna Gloria

Create from home with us

Art-making activities for all ages

Click here to explore our museum galleries and sculpture park!

Past performances, talks, lectures, and more

Teach and learn from home

Get to know all the Contemporary has to offer at this family-friendly open house at Laguna Gloria!

A Walk in the Park with Phonography Austin

Discover the natural and artistic wonders of Laguna Gloria during a guided walk with Phonography Austin.

The Contemporary Austin’s annual fundraiser, Art Dinner, benefitting the museum’s thought-provoking exhibitions programs, will be reimagined this October as a unique celebration featuring intimate gatherings across the city. Stay tuned for more information!

Atoui will receive an unrestricted cash award, along with production expenses for a solo exhibition premiering at The Contemporary Austin, Texas, and traveling to The FLAG Art Foundation, New York, and an accompanying exhibition catalog.

The Contemporary Austin is pleased to announce that Tarek Atoui (born 1980 in Beirut, Lebanon; lives and works in Paris, France) is the winner of the 2022 Suzanne Deal Booth / FLAG Art Foundation Prize. In addition to receiving a $200,000 cash award, Atoui will present a solo exhibition premiering in Austin in spring 2022 at The Contemporary’s downtown venue, the Jones Center on Congress Avenue. The exhibition will then travel to The FLAG Art Foundation in New York, where it will open in fall 2022. In addition to the exhibition and monetary award, the prize includes a scholarly exhibition catalog and public programming around the exhibitions at both venues.

The Contemporary Austin announces that it has received a grant of $35,000 from the National Endowment for the Arts in support of the upcoming exhibition Deborah Roberts: I’m, opening at the museum’s downtown Jones Center location on January 23, 2021. The Art Works award is among $84 million in grants announced this morning by National Endowment for the Arts Chairman Mary Anne Carter, as part of the Arts Endowment’s second major funding announcement for fiscal year 2020.

“We are honored to receive this Art Works award on behalf of The Contemporary and the very important exhibition of works by Deborah Roberts,” said Margie Rine, Interim Executive Director. “Roberts’s practice addresses issues that we hope will encourage important conversations in our community during the run of the exhibition. Her compelling work weaves together history and culture, celebrates the Black body and Black identity, and draws attention to our nation’s history of racism. We are grateful to the National Endowment for the Arts for supporting and recognizing an artist of Roberts’s stature and relevance.” Valerie Armstrong, President of the Board of Trustees of The Contemporary Austin, announced today that sharon maidenberg has been named the museum’s new Ernest and Sarah Butler Executive Director and CEO, following an international search. maidenberg comes to The Contemporary Austin from Headlands Center for the Arts in the Golden Gate National Recreation Area, north of San Francisco, where she has served as Executive Director since 2010. She will assume her position in Austin on September 1, succeeding Louis Grachos, who left the museum in June 2019.

"I am thrilled to take on my next professional opportunity in one of the country’s most dynamic and rapidly evolving cities,” said sharon maidenberg. “Like the Bay Area, Austin is one of the most innovative places in the country, and it’s clear that culture, community, and creativity are deeply valued. I am eager to become part of the rich arts ecosystem in Austin at this critical time in the world—a time when the arts can and should play an integral role in society. During my tenure at Headlands I’ve worked with artists directly, built a strategic culture of relevant and thought-provoking audience engagement, and invested deeply in cultivating meaningful relationships. I look forward to applying my experience and perspective to The Contemporary’s already strong programs, and to working with the great staff and Board to write the organization’s next chapter."

As the recipient of the 2020 Suzanne Deal Booth / FLAG Art Foundation Prize, New York–based artist Nicole Eisenman (American, born 1965 in Verdun, France) will present an exhibition at The Contemporary Austin’s downtown venue, the Jones Center (700 Congress Avenue), with an outdoor sculpture to be installed at the museum’s fourteen-acre sculpture park at Laguna Gloria (3809 West 35th Street). Encompassing drawing, painting, sculpture, and video, this exhibition explores the artist’s two- and three-dimensional works of the past three decades and includes a presentation of her recent large-scale, anti-monumental sculptures. Nicole Eisenman: Sturm und Drang is the artist’s first full-scale, solo exhibition in Texas, and the first-ever presentation of her work in Austin.

In fall 2018, Eisenman was selected for the 2020 Suzanne Deal Booth / FLAG Art Foundation Prize by an independent advisory committee composed of renowned curators and art historians from across the US, led by Heather Pesanti, Chief Curator & Director of Curatorial Affairs at The Contemporary Austin. As the 2020 recipient, Eisenman receives a $200,000 unrestricted award along with a solo exhibition, related public programming, and a scholarly catalogue. The exhibition will be on view at The Contemporary Austin from February 27 through August 16, 2020, and a related exhibition will travel to The FLAG Art Foundation in New York, opening October 3, 2020, and closing September 23, 2021. More information about the exhibition, public programs, and the prize can be found here.

The Contemporary Austin and grayDUCK Gallery are pleased to present the exhibition Crit Group 2019, featuring work by eight artists who participated this year in the museum's Crit Group—a program that combines group critique with professional development to support the holistic artistic practice of local artists. This eight-month-long program aspires to build a supportive community of Austin artists and to strengthen their practices with input from each other and established professionals in the field.

The opening reception will take place Saturday, July 27, from 2–4 pm at grayDUCK Gallery. In addition, the participating artists will give a public gallery talk about their work and their artistic growth during a program on Saturday, August 25, at 3 pm. The exhibition is on view at grayDUCK Gallery through August 25, 2019. Regular gallery hours are Thursday–Saturday, 11 am–6 pm and Sunday, 12–5 pm. All events are free and open to the public. On view at the museum since 2017, the poignant, monumental sculpture—by an artist who is among the most influential artists in the world—is now part of the museum’s permanent collection, for visitors to appreciate on every visit to the museum’s Betty and Edward Marcus Sculpture Park.

Acquisition of Iron Tree Trunk, 2015, is made possible through the generous contributions of more than seventy individuals and foundations in Austin and nationally.

Melba Whatley, Chairperson of the Edward and Betty Marcus Foundation said, “What could be more wonderful than participating in the acquisition of Ai Weiwei’s singular work Iron Tree Trunk. We believe great art elevates us all. Through Ai Weiwei’s monumental sculpture we brush up against China, immigration, civil rights, nature and the awe-inspiring dimensions of genius. All Austinites can be proud that this community has matched the Marcus Foundation’s financial support for this most important addition to the city’s cultural landscape.”

The Contemporary also announces an extension to the loan of the artist’s Forever Bicycles, 2014, which will now remain on view through June 2019 at the Waller Delta downtown.

Eisenman will receive an unrestricted cash award, along with production expenses toward a scholarly publication and a solo exhibition premiering at The Contemporary Austin, Texas, with a version of the exhibition then traveling to The FLAG Art Foundation in New York. Louis Grachos, the Ernest and Sarah Butler Executive Director & CEO of The Contemporary Austin, is pleased to announce New York based artist Nicole Eisenman is the winner of the 2020 Suzanne Deal Booth / FLAG Art Foundation Prize. In addition to receiving a cash award, she will present a solo exhibition premiering in February 2020 at the museum’s downtown venue, the Jones Center on Congress Avenue, with the option to extend the exhibition to the museum’s fourteen-acre sculpture park at Laguna Gloria. The exhibition is scheduled to open to the public in Austin on Thursday, February 13, 2020. A related exhibition will then travel to The FLAG Art Foundation in New York, where it will open in fall 2020. In addition to the exhibition and monetary award, the prize includes a scholarly publication and development of public programming around the exhibitions.

The Contemporary Austin receives $100,000 grant from the Andy Warhol Foundation for the Visual Arts

Prestigious grant will support a major group exhibition that will span both sites of The Contemporary Austin, opening in fall 2019.

Exploring the intersection of art and anthropology, The Sorcerer’s Burden will feature new and existing work by emerging and mid-career artists from around the globe. Funding from the Warhol Foundation will support new, site-specific works designed to activate the museum’s urban and outdoor sites: the Jones Center on Congress Avenue and Laguna Gloria on the shores of Lake Austin. The grant will also help fund a scholarly catalogue published in partnership with Radius Books, Santa Fe. The Sorcerer’s Burden is curated by Heather Pesanti, Chief Curator & Director of Curatorial Affairs at The Contemporary Austin. Through additional funding provided by Glenn and Amanda Fuhrman, the new Prize will transform the existing, $100,000 Suzanne Deal Booth Art Prize, which is currently celebrating its inaugural exhibition, into one of the largest awards presented to an artist. The Suzanne Deal Booth / FLAG Art Foundation Prize will fund a $200,000 unrestricted award to an artist selected by an independent advisory committee comprising renowned curators and art historians from across the U.S. and internationally, a scholarly publication, and all production expenses for the creation of new work for a solo exhibition that will premiere at The Contemporary Austin in Texas and then be presented at The FLAG Art Foundation in New York.

Groundbreaking for Phase I of the Laguna Gloria Master Plan

We are delighted to announce that we have completed fundraising for Phase I of the Master Plan for Laguna Gloria! Featuring a range of new visitor amenities and a welcoming new entrance, Phase I of this multi-year project will transform the visitor experience at the museum's beloved art-in-nature site on the shores of Lake Austin. The project will break ground this spring, thanks to a $3 million grant from The Moody Foundation, with additional grants from the Still Water Foundation, Edward and Betty Marcus Foundation, The Meadows Foundation, Austin Community Foundation, and The O'Shaughnessy-Rivers Family Fund, along with gifts from board Trustees Jeanne and Mickey Klein, Kathleen Irvin Loughlin and Chris Loughlin, and Jannette and Pat Keating. Please join us for the Groundbreaking Celebration for Phase I on Wednesday, March 21. 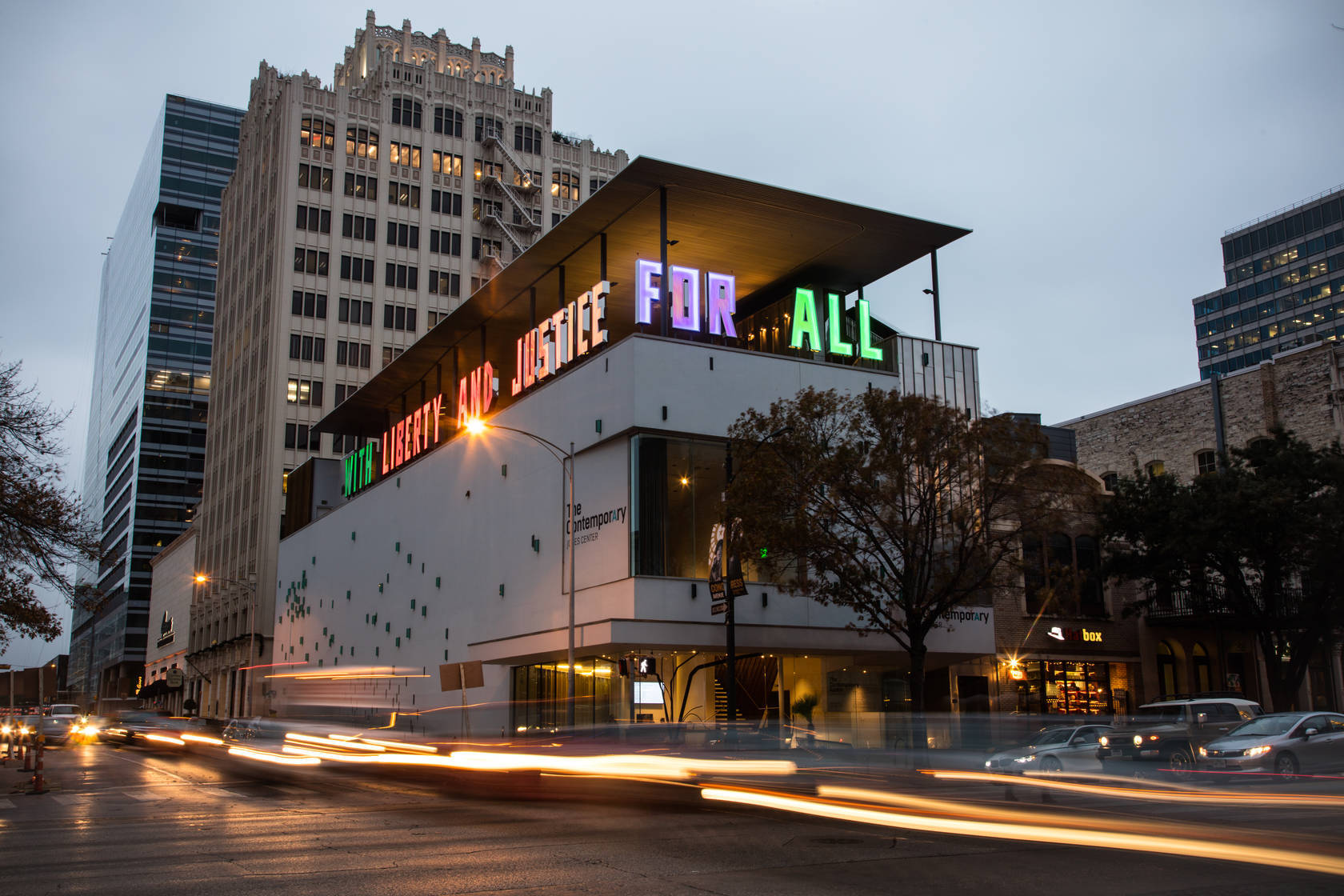 Congratulations to LTL Architects, who received The Architect's Newspaper's 2017 Best of Design Award for Adaptive Reuse for the stunning renovation of the Jones Center on Congress Avenue! According to award juror Eric Bunge, Principal of nARCHITECTS, “Simultaneously serious and whimsical, the project is a beacon not only for Austin, but for adaptive reuse in general—inspiring for its inventiveness.”